When To Travel To India

When To Travel To India

India's weather varies dramatically. The majority of the subcontinent is tropical with three seasons: summer, monsoon and winter. The best time to visit for warm, dry and sunny weather is between October and early March in winter before temperatures soar. The north offers clear blue skies then, creating ideal conditions for taking in the highlights and hidden gems of India. Christmas and New Year is a great time to go. The prices may be high but there are glorious daytime weather, low humidity and cool nights.

Summers can get very hot, lasting from March through to May, when temperatures reach their peak. However, everywhere is air-conditioned and prices are off-peak. This season is also the best time of year for wildlife viewing, especially if your dream is to see a tiger in the wild. For it is during these hot, dry months that animals flock to the water sources thereby making their movements much more predictable.

May signals the start of the monsoon season. This begins in Kerala on the south-western coast, bringing with it regular downpours interspersed with sunny hot intervals that gradually work their way up the country. But – watch Chasing the Monsoon – and you’ll realise the magic of the monsoon. The hills are green. The flowers come alive. There is beauty all around. The hotel surroundings are in full bloom (the Taj Lake Palace is particularly stunning). The monsoon season is a more affordable time to visit India, too.

So, here’s our guide on what to expect, where and when…

Throughout the year, there are lots of great festivals and interesting religious celebrations, which are worth considering when planning your journey. Diwali is one of the most important celebrations in India. Marking the start of the Hindu New Year, the five-day festival is an extravaganza of giving gifts, lighting fireworks and burning lamps. Dates vary depending on the Hindu lunar calendar. The ‘Festival of Colour’ Holi is another big celebration. Taking place every March, this two-day Hindu festival marks the beginning of spring and is a celebration of fertility, colour, and love, as well as the triumph of good versus evil. Held across India, the festival involves throwing coloured water and gulal (powder) at anyone within range. Messy but lots of fun!

The high Himalayas have distinct seasons, varying according to latitude and altitude. May to August is the best month for exploring the hill stations like Shimla, Dharamshala, Mussoorie and the magical ex-Buddhist kingdom, Ladakh with the region’s stunning, dramatic landscape ripe for excellent trekking. Travel here should ideally be avoided from December to February when the snow is at its heaviest, making some areas impassable.

The best time to go to Delhi is during winter, from October to March, as it is relatively dry and temperatures are more moderate. Nights can be chilly from November to February with temperatures dropping to around 8°C, and highs in the low 20s, while October and March are warmer with peaks around 30°C. May and June are very hot with lows around 26°C and highs reaching an average of 45°C. Hot, dry winds are common and occasionally dust storms occur. July through to September is the monsoon season, with rising humidity and heavy rains in July and August.

The Taj Mahal in Agra is breathtakingly beautiful whatever the season. If you are travelling from November to February, fog can sometimes obscure your view in the early morning, so go later in the morning or the afternoon. For the rest of the year, the best time to visit is around sunrise, when there are fewer tourists and the midday heat is yet to set in.

Rajasthan including the Golden Triangle route has a desert-like climate. Pleasant daytime weather kicks off the new year. Mid-winter cool lingers throughout the north and, in the desert, temperatures drop substantially in January, making it an ideal time to explore the golden sands. Around Udaipur temperatures in summer can be a welcome few degrees cooler, while the “arid west” has maximums averaging 45°C. To the west of the Aravalli Hills including Jaisalmer, there is very little humidity and rainfall, while to the east the climate is sub-tropical. The driest areas such as Jaisalmer get only 10cm of rain a year, while other parts of the state receive up to 100cm. Almost all of the rain in Rajasthan occurs in July and August.

Rajasthan also plays home to many fabulous festivals: Jaipur Literature Festival in January, which attracts the best of local and international authors. Then, in November, the Pushkar Camel Fair, another joyous occasion, with camel racing, dancing, folk music and ritual bathing in Pushkar’s holy lake. Dates vary each year.

Mumbai is a monsoonal destination and generally humid due to its close proximity to the Arabian Sea. The best time to visit is from October to May when there is almost no rain. The city is wet from June to September, especially July and August when there are few days without at least some downpours. July alone sees an average of 86cm of rain. Temperatures are fairly stable throughout the year. Lows vary from 16°C in January to 26°C in May, while the peak temperatures vary by only a few degrees from 29°C in winter to 33°C in summer.

If you plan to visit India for its beaches, head to Goa, India’s Sunshine State. With warm weather, clear skies and plenty of suns, there are pleasant temperatures all year-round with low temperatures around 24°C most of the year, dropping a few degrees from December to February and rising a few in April and May, when Goa is at its hottest. High temperatures are around 32°C, except during the monsoon when they drop a few degrees. The monsoon season from June to September brings a large amount of rain, peaking at 99cm in July with an average of 27 days of rain that month. The rain eases in September, and from October to April, there is very little rain at all.

The south of India is the closest to the equator so temperatures are hot and tropical year-round. It rarely drops below 22°C and temperatures peak between 28°C and 31°C except in the hottest months of May and June when they reach 34°C. Two-thirds of the rain falls from June to August, with heavy rains prevalent throughout the day. The rest falls from September to December, when torrential downpours in the afternoon leave the rest of the day warm and pleasant for venturing out. Kerala is sultry and hot throughout the year, with temperatures up to 33°C. December to February, the cool, dry season, is the perfect time for cruising the lush backwaters, going wildlife spotting in the national parks and spending a few days relaxing on the golden beaches. 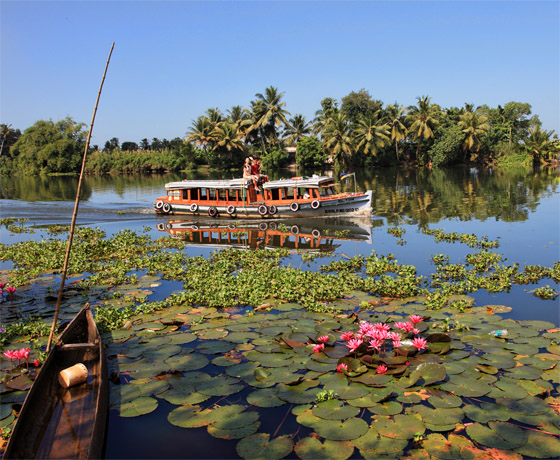 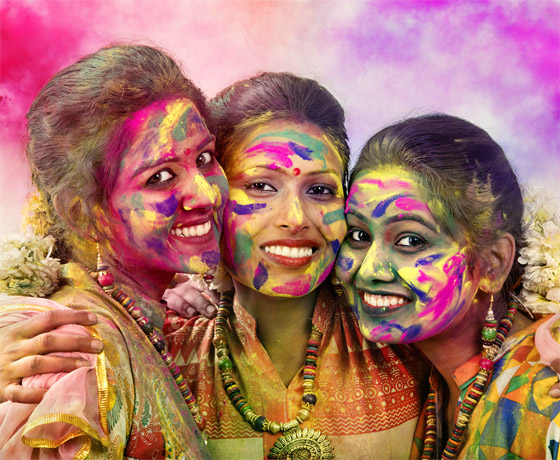 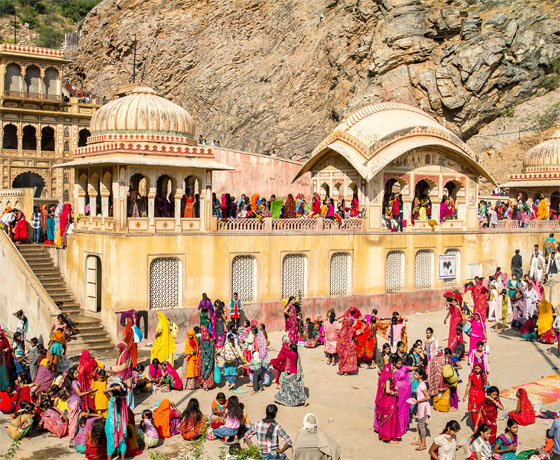 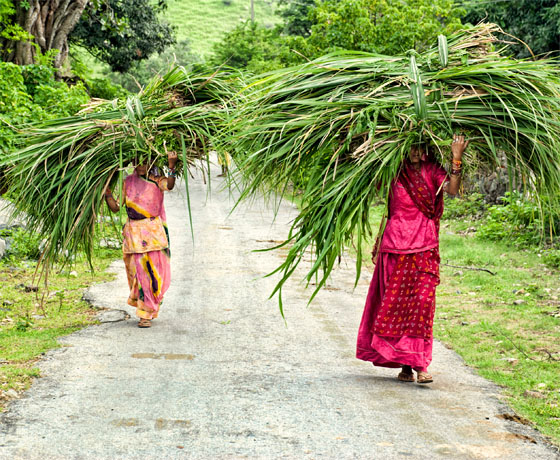 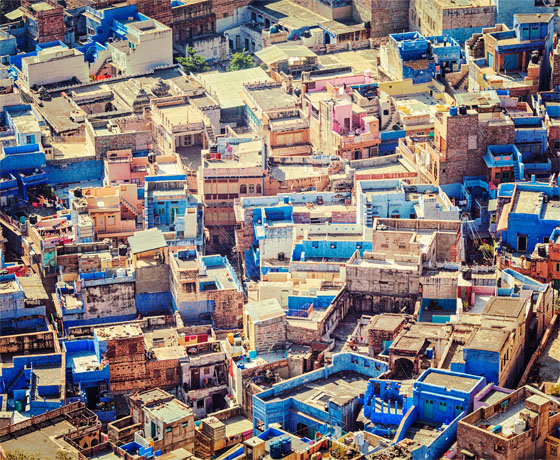 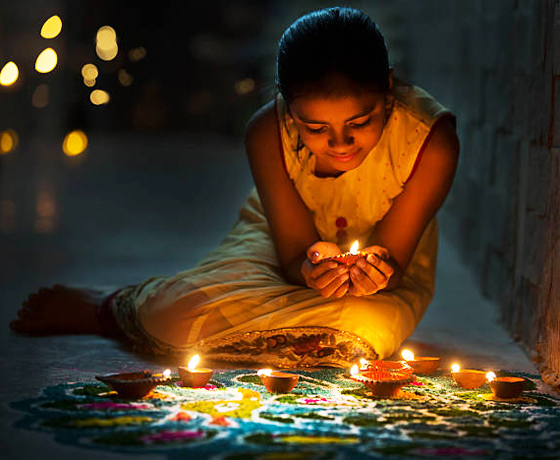